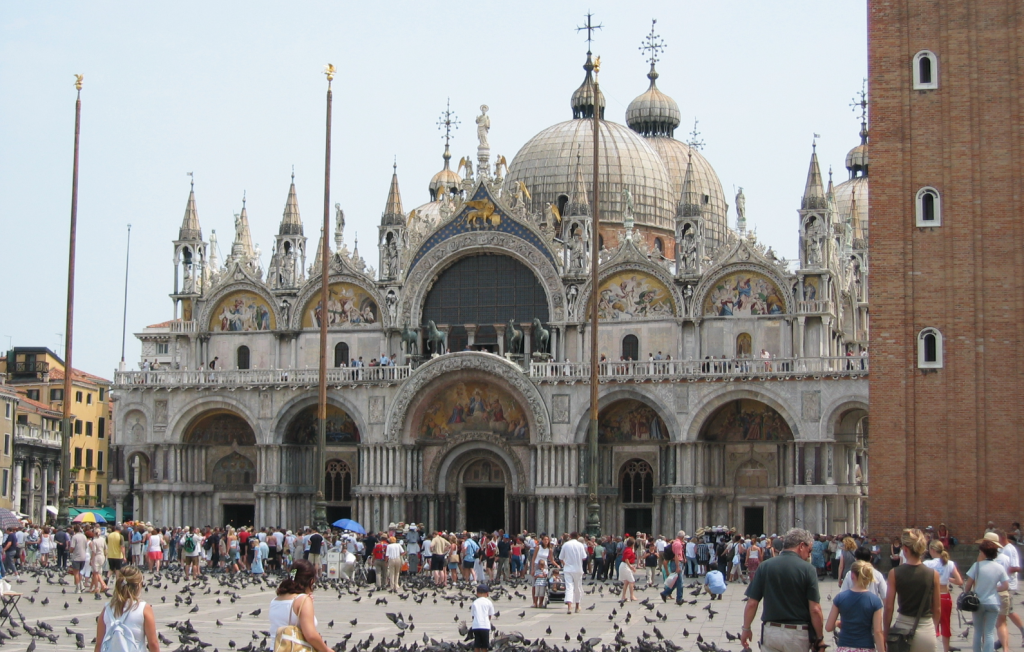 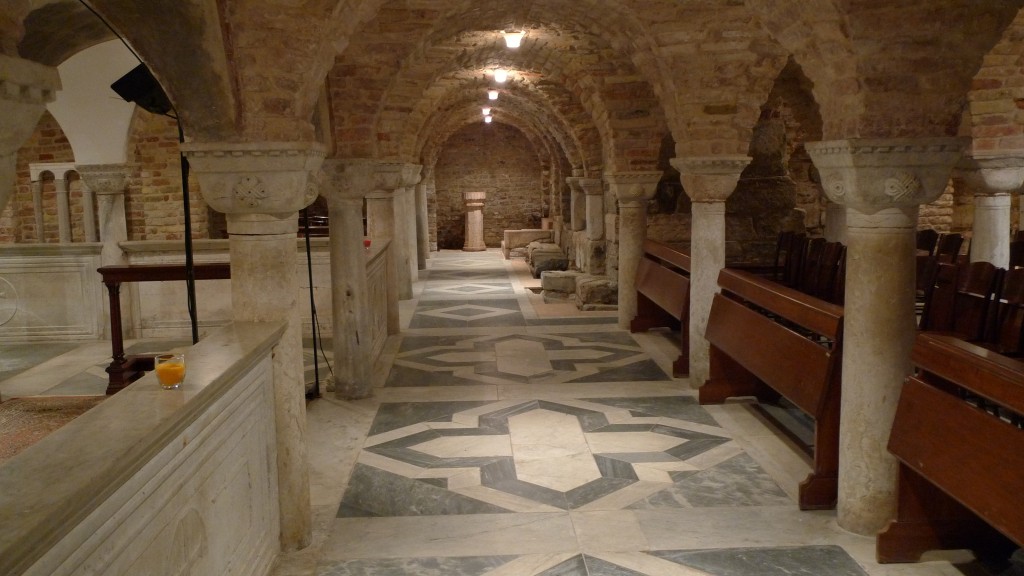 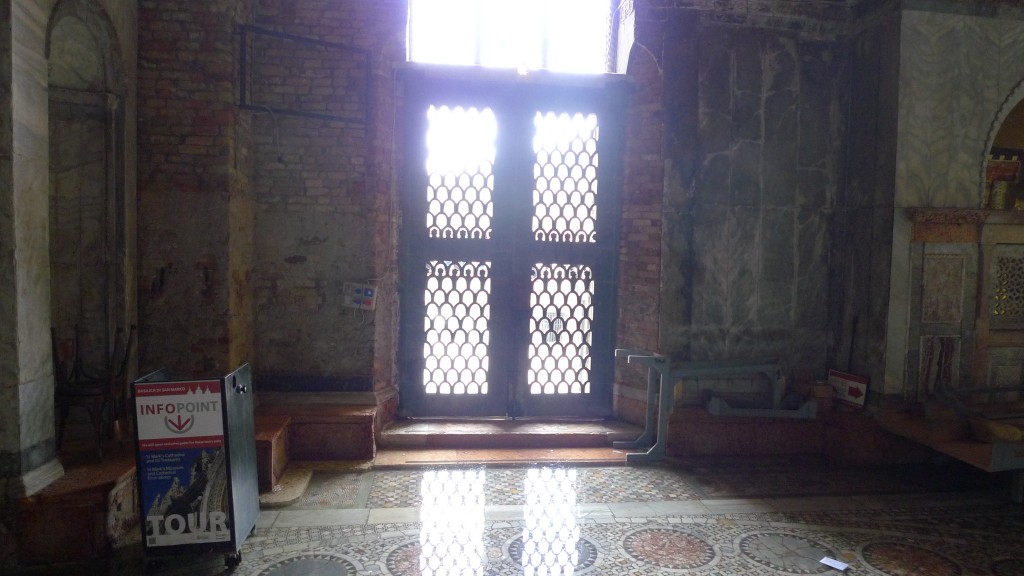 The Saint Mark’s Basilica is the Patriarchal Cathedral of the Roman Catholic Archdiocese of Venice and, since 1807, the seat of the Patriarch of Venice. It is the most famous of the city’s churches and one of the best known examples of Italo-Byzantine architecture.

Different construction phases are recognizable in its structure. The first church was started in 828 as the chapel of the Doge, directly connected to the Doge’s Palace, to host the supposed relics of Mark the Evangelist (stolen in Alexandria). From the same century dates the first St Mark’s Campanile (bell tower). The church was burned in a rebellion in 976 and rebuilt in 978. Local materials, e.g. Aurisina and Verona stones, Trachite, recovered materials, mortars of slaked limes with cocciopesto and low quantities of sand sometimes also with marine salts were used for the construction of the early buildings by the local technician mureri, tajapiera, marangoni e favri (bricklayers, stonemasons, carpenters, smiths), but the original configuration remains unknown.

The present Basilica, the third one, was built with a mixture of Italian and Byzantine features around the second half of the XI century by Contarini, using the “muro a sacco” technique (brick-faced concrete) to sustain the chapels, the roof and the domes and irregular screeds of lime mortars with sand from the river deltas not always pure (presence of salts).

In 1106 the church, and especially its mosaics, were damaged by a serious fire and in the first half of the 13th century the narthex and the new façade were constructed, most of the mosaics were completed and the domes were covered with second much higher domes of lead-covered wood in order to blend in with the Gothic architecture of the redesigned Doge’s Palace [5].

The basic structure of the building has not been much altered since then, but its decoration has changed greatly over time, though the overall impression of the interior with mosaics remains the same. The succeeding centuries contributed to its adornment with many elements brought in from ancient or Byzantine buildings. Gradually, the exterior brickwork became covered with marble cladding and carvings. The latest structural additions include the closing-off of the Zen Chapel (1500s).

Nowadays, the exterior of the west façade of the basilica is divided in three registers: lower, upper, and domes. In the lower register five round-arched portals open into the narthex. The upper level of mosaics in the lunettes of the lateral ogee arches has scenes from the Life of Christ and the history of the relics of Saint Mark. The stone sculpture is relatively limited at the lower level, where a forest of columns and patterned marble slabs are the main emphases. In the upper register, from the top of ogee arches, statues of Theological and Cardinal Virtues, and Saints watch over the city. In the centre of the balcony the bronze horses face the square.

The interior is based on a Greek cross, with each arm divided into three naves with a dome of its own as well as the main dome above the crossing. The dome above the crossing and the western dome are bigger than the other three. The marble floor (12th century, but underwent many restorations) is entirely tessellated in geometric patterns and animal designs. The lower register of walls and pillars is completely covered with polychrome marble slabs. The upper levels of the interior are completely covered with bright mosaics covering an area of about 8000 m2.

The history of the interventions and the diagnostic analysis points out that several degradation factors affect the conservation of Saint mark’s Basilica, among them:

The main conservation problems in the Basilica arise, in particular, from the intrinsic structural instability and to the damages due to high waters and rising damp. Therefore, the Basilica underwent continuous restoration interventions since the XI century (mainly maintenance interventions and newly made mosaics and decorations), but only after the XIX century the documentation is more systematic.

During the XIX century structural works were done: under the Austrian domination; with the direction of Meduna (which consolidated the structures but also considerably altered original parts according to the restoration theories of Viollet-le Duc) and the direction of Zorzi (conservative conservation more in line with the Ruskin’ ideas); under the direction of Saccardo (wide use of Portland cement and fluosilicates) till the collapse of the bell tower of Saint Mark, when he was fired and became the scapegoat of the fall.

Since 1903, Manfredi supervised the restoration works and highlighted the need of more scientific and precise diagnostic and monitoring instruments and used a new approach based on a better knowledge of the ancient structures and materials.

The restoration and maintenance interventions were almost stopped till the end of the Second World War and restarted with Forlati in 1948, who preferred the use of traditional materials instead of new bricks and cement mortars, too rigid for the ancient structures of the Basilica.

After the flooding of 1966 the impermabilization of the Crypt was necessary, together with the consolidation by micropoles of the Mascoli Chapel. Under the direction of Rusconi (1972-75) and Scattolin (1975-80) synthetic resins were applied for the first time.

Other structural intervention were done before and in occasion of the Saint Mark’s Celebration of 1994 under the direction of Arch. Vio, when necessary desalination and water-repellent treatment were carried out in the Crypt walls. More recent interventions included mainly maintenance works of the mosaics and external surfaces.

A great effort have been made in the recent years to study, investigate, systematize the knowledge regarding the Basilica using a scientific approach and also developing new diagnostic methods. The evaluation over time of the single interventions was systematically done, and the Fabrica of Saint Mark Basilica is trying to become an example of the modern approach to Cultural Heritage Conservation which integrates the diagnostic, monitoring, conservation, maintenance phases.

Rising damp inside the Crypt [4]

The Crypt is under the level of water (-20 cm on the “medio mare” -average sea level-) and before the restoration of 1993 the floor was constantly submerged, and even the vaults were reached directly by salty water during the flooding of 4/11/1966. The presence of moisture inside the structures, efflorescence of salts, water infiltrations from the floor, walls completely soaked by the rising damp were ubiquitous. 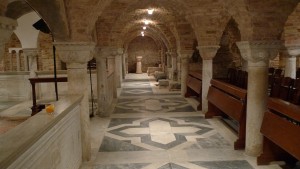 The problem of the damages caused by the presence of water and salts inside the structure was faced in different way during the restoration works. On one side it was necessary to act on the structures by consolidating the floor and the walls with epoxy-resins injections till 150 cm above the floor; by creating a new polyurethane slab/screed before replacing the marble floor; by replacing the old and damaged grout joints between the bricks with an acrylic-lime grout covered by a traditional cocciopesto plaster on the external part of the joint for aesthetic reasons. On the other side it was necessary to act on the internal environment by pumping the infiltration water (coming from underground) outside and by conditioning the Crypt with a dehumidifying system in order to dry the air and avoid condensation on the Crypt surfaces.

The analysis of the moisture content in the walls indicated high moisture contents, higher than other Venetian sites, probably due to the low level of the floor (-18 cm on comune marino). The entire height measured (till 240 cm) is affected by a moisture content over 20% on the first 0-10 cm, for deeper areas the MC% diminished reaching values around 12% at 30 cm depth. Furthermore, condensation phenomena on the outer part of the walls could occur, which lead to the complete soaking of the outer courses of bricks.

The presence of salt efflorescence observed on the surface of the walls is due to evaporation of water from the first layer of the bricks, local supersaturation conditions and consequent precipitation of salts.

Rising damp in the Narthex [3]

The narthex of the Basilica is frequently flooded by water due to its low height (+64-80 cm on comune marino) becoming a pool of salty water. In the last conservation intervention the narthex have been treated with traditional techniques by injection of hydraulic lime mortars with low content of soluble salts, cement mortars were used only in few spots. The damages are linked mostly to rising damp moisture even if condensation phenomena could occur, too. 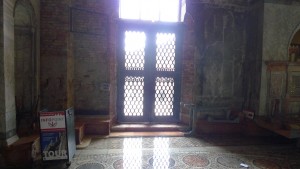 During April 1998, an experiment of dehumidification took place in the Narthex: a system based on charge compensation technology was placed in the wall on the right side of the narthex near Zen Chapel, after the removal of the surface marble panels. A double row of metal bars of mild carbon steel chemically and electrically isolated with a neoprene cover of around 200 cm longs and 30mm in diameter were inserted diagonally into the wall every 50 cm. The collected data showed the presence of high moisture contents till 3-4 m, no significant changes in moisture contents and distribution were observed after one year from the bars application.

In [8] the data regarding two other distribution of the moisture content and of the soluble salts on walls of the Saint mark’s Basilica are reported. In particular, the data relates to an external wall near Piazzetta dei Leoni (ground level at +80 cm on CM). The external wall was affected by a high presence of moisture due also to its low position. In this case the external part is seriously affected by rising damp due probably to an external source of water (high tides) more than an internal ones. However, the water content seemed to diminish with the height in agreement to the traditional model of rising damp.

EMERISDA ON THE HERITAGE PORTAL